As an Inox, Nathant the Brute towered over us. He joined Impulse and me in going through the cult’s portal, where we found ourselves in some other dimension, surrounded by elemental demons.

“I. Hate. Demons,” he said, pummeling through spirits of flame and earth, soon covering himself with their dust and soot. When we saw a Sun Demon behind one door, he paused in his tracks.

Without any regard to tactics or conserving our resources, he charged ahead, silhouetted by the thing, thrashing at it with all his fury. The other demons soon fell around us, and we suddenly felt like we were falling through an endless chasm. We descended gently into the private court of a monstrous creature, horned and terrifying, standing on four hooved legs. Its presence blasted us with the blasts of desert-like air.

It said we were “interesting” and could be “of use” to it, and that we should fetch him an “artifact of great power” in a forgotten temple along the Serpent’s Kiss River. Agree to this task, or die.

We agreed, but grumbled on our way out. Are we now mere servants to some Lord of Hell?

END_OF_DOCUMENT_TOKEN_TO_BE_REPLACED

Posted by ronaldsf on July 18, 2019 in Campaign, gloomhaven 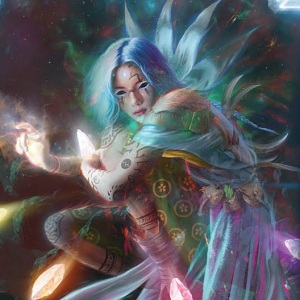 The dark void where her eyes should have been made it difficult to read her intent, but it did speak of great power.

“I knew you would come,” she said when we approached her in the Sleeping Lion looking for more adventurers. She introduced herself as Diviner. “I am ready to go.”

She said she knew that we would succeed at “sending a message” to the Inox encampment this time, but only if she came with us. Since there seemed to be no reason to distrust her — there being other reason for her to go to the encampment — we agreed she could come. She smiled, and promised to “guide” us on our journey. We already knew where the encampment was; what she meant only became clear later.

We again confronted the encampment. I expected Diviner to step forward manipulate the elements in the same manner as I, but instead she stepped back and the darkness in her eyes deepened and her hair waved back.

END_OF_DOCUMENT_TOKEN_TO_BE_REPLACED

Posted by ronaldsf on July 1, 2019 in Campaign, gloomhaven

Gloomhaven #2: From Another World

(Scenario #4 Crypt of the Damned, and Scenario #3 Inox Encampment)

We decided to investigate the turn in the Still River to find out more about this “Gloom.” But while leaving the city, we came upon a vermling who offered to send us a slimy gear. We gave the rat ten gold for the curiosity. Impulse said she would add it to her “collection.” Whatever she meant I don’t know, but the mystery of its origin intrigued me.

We ventured north along the river, helping a caravan carrying prisoners retrieve their lost charge along the way.

“Doing good deeds will do you good!” said Impulse.

The stench of death told us we had found another crypt. The bandits inside consorted with skeletons and cultists, which was surprising by itself. But nothing could have us prepared us for the mountain of pure elemental energy that we faced in the form of an Earth Demon.

END_OF_DOCUMENT_TOKEN_TO_BE_REPLACED

Posted by ronaldsf on June 26, 2019 in Campaign, gloomhaven

We met when she tried to rob me. Impulse tried to attack me in a dark alley, only to be thwarted by the elemental defenses I had prepared for the occasion. We respected each other immediately.

I was recruiting adventurers in Gloomhaven. I came to this isle because my people’s meditations had revealed that there was a dark force set to rise on this isle. I volunteered to investigate, as I knew this was an opportunity to advance my quest to discover new magical secrets. It was better not to adventure alone, and I needed a “local guide” for this isle and this city.

Of course, I knew I couldn’t really trust someone who had just tried to rob me. But I knew that she had use for me and my magical powers which could unlock new opportunities for monetary gain.

END_OF_DOCUMENT_TOKEN_TO_BE_REPLACED

Posted by ronaldsf on June 23, 2019 in Campaign, gloomhaven