Wrath of the Righteous #50: Made Whole

The party enters the heart of the Ineluctable Prison to reclaim Iomedae’s champion. (-GM) 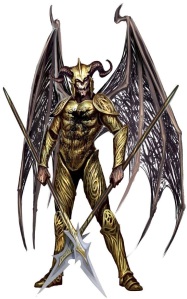 The time had finally come to fulfill our mission and save Harold, at any cost. We navigated through the twisting halls of the prison, the maze burned into the back of my mind as I turned again and again. Soon, we reached an altar that would teleport us to Harold himself.

Moments later, we were in a great chamber, with black ash drifting through the air and pits of lava before us. We had been joined a bit earlier Arackthos, a mammoth rider who had been trapped within the prison, but he was disgruntled by the obstacle between us and our poor corrupted friend. Harold rose from the altar upon which he had been resting and leveled two glaives at us.

“Foolish mortals, you are too late. Your blood will wet the last step I take to ascension. Your time is up.”

He flew at us, a swirling whirlwind of blades and death. Beckles leaped into the fray, unleashing a powerful barrage of punches. Nunya blessed the party and holy light surged around us. Fella shot arrow after arrow into Harold, yet still he remained standing. Meanwhile, demons crept out of the shadows and began to let out unholy shrieks, bringing the mammoth to its knees and staggering the rest of us. I tried to obliterate Harold, but I could not overcome the incarnation of Baphomet’s will.

Then, suddenly, Beckles raised his fist high into the air. Our collective hopes and desires to set reality back to its right path fueled him and he pummeled Harold again and again. Even as the glaives tore his flesh he continued his flurry.

And just as quickly as it had begun, the battle was over. Harold lay dying in Beckles’ arms, but I knew there was one last thing I could do for this tortured soul. I laid his heart back into his chest, allowing him to survive, weakened as he was.

The chamber quaked with the Baphomet’s fury, and we were not ready to face the demon lord. We stole Harold away and plane-shifted back home.

Iomedae appeared before us, and Harold begged for forgiveness. The goddess thanked us and granted us her favor, even removing the curse that had haunted me from my youth. But she told us that our greatest challenge still lay before us, and our job was not yet finished……

Posted by ronaldsf on June 24, 2019 in Campaign, Pathfinder Chronicles, Wrath of the Righteous 1

3 responses to “Wrath of the Righteous #50: Made Whole”

This site uses Akismet to reduce spam. Learn how your comment data is processed.